The Hohensalzburg in September, 1977.

When I first arrived in Salzburg, Austria in 1976, I wasn’t a tourist.  I had arrived in a city that was going to be my home for the next two years.  Like any tourist, though, my first view of the castle overlooking the old city overwhelmed me.  As I looked at that iconic cityscape, I drew out my camera and started taking pictures, like hundreds of thousands of others before and after me.  Those initial pictures, taken during the first two weeks of my stay in Salzburg, looked very similar to everybody else’s pictures.

As time went on, I never lost my love of that cityscape.  I returned to the bridges spanning the Salzach River countlessly, and – in the age before digital cameras – produced a couple of pounds of slides I subsequently threw away.  Because I was there over a period of time, though, because I lived in the city and moved around in it, because I wasn’t just passing through, I was able to see it’s streets, cathedrals and the fortress in a wide variety of guises. 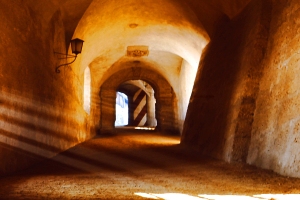 Inside the Hohensalzburg, September, 1976.

I saw the city in snow, in fog, and in May of 1978, with a full moon rising over the mountains.  And on one particular occasion, as I went inside the castle wall, I saw beams of sunlight fanning through dust motes in a deserted passageway.  If I had only been passing through, those scenes would never have graced my eyes – or my camera lens.

Mature prayer is like living in a beautiful city and exploring the passageways day after day.  It’s that persistent, daily exploration that leads you to discoveries you would’ve missed had you just been passing through.  As you live with silent, listening prayer over a period of time, in all kinds of “weather” and circumstances, you become present in a much deeper sense.  As you live in prayer even when it isn’t all that attractive, “productive,” or especially enlightening or encouraging, you discover realities unavailable to the spiritual tourist.

So, dwell there.  Patiently live there.  Explore the silence daily, and inevitably, you’ll discover the true depths of its beauty.

Salzburg as viewed from the Mozartstieg in May, 1978.

Drexel has been senior pastor of four churches in Kentucky and Virginia, a psychiatric ward chaplain, denominational bureaucrat, and an erstwhile indie singer/songwriter/story-teller and seeker of authentic human vocation. Currently, Drexel is working at the University of Alabama at Birmingham Medical Center in the capacity of The Support Team Network manager, a hospital-based community partnership aimed at nurturing healing communities for discharged patients. He loves kayaking, road cycling, hiking, and all kinds of photography, but he loves his wife Vicki and blended family of three adult children more. He holds a Ph.D. in the Psychology of Religion and a pastoral counseling certificate from the University of Louisville, Department of Psychiatry.
View all posts by Drexel Rayford →
This entry was posted in God's Language, Listening. Bookmark the permalink.

1 Response to A Spiritual Tourist?