My Kindred Spirit on the Edge of Inner Mongolia

Posted on November 7, 2013 by Drexel Rayford

I met a Chinese imam once in a village on the edge of the Gobi Desert.  I never learned the village’s name, nor the name of the imam.  I had organized a team of medical professionals from some Virginia Baptist churches to go and dialogue with medical professionals associated with the China Christian Council.  We’d flown to Shanghai, then to Lanzhou in China’s far west.  After some time touring a major hospital and some regional clinics, we drove four hours east of Lanzhou.

Lanzhou is a huge city, every bit as modern as Philadelphia or Richmond.  As you drive west, though, coming ever closer to the Gobi Desert, all signs of vegetation disappear except for a few scrubby trees here and there.  Soon, you drive through a tan-gray landscape with dusty, rounded hills reaching off into the distance in every direction.  The constant wind blowing off the huge desert that takes in Inner and Outer Mongolia whips up dust and sand so that the sky’s color matches the ground.  Clusters of whitish adobe-like houses hunker in the folds of the hills behind which terraced slopes rise where farmers eek out subsistence agriculture.  Here and there shepherds hunched against the constant wind guide small herds of sheep and goats among scant forage. 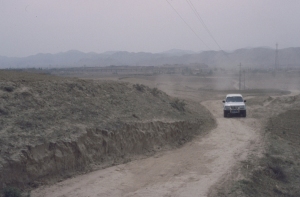 The main road to our village reception.

Soon, the highway goes from four lane to two, from smooth pavement to rough, then to a wide, one-lane gravel road, then to a two-rut dirt track.  We turned off one of those tracks and followed it around countless twists and turns with dusty clouds wafting into the interior of our SUVs through the AC ducts.  We rounded one curve and our interpreter, Shau Hu, pointed to a cluster of dingy houses and said that we were going to the clinic in that village. 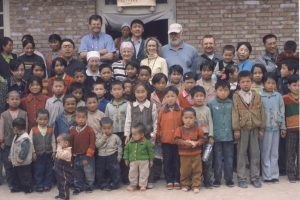 The village children gather around our team. Shau Hu, our interpreter, is the last adult on the back row at the very right, smiling, wearing glasses.

We rounded the final turn, and astonishment seized us.  Much of the local population stood lining both sides of the final 100 yards into the village.  As we emerged from our SUVS, they began applauding.  A small marching band stood there holding aloft the Chinese flag and the Stars and Stripes.  The band began playing a marching tune and we fell in behind this honor guard, immediately followed by the mayor and some officials, including the imam wearing a Muslim head covering.  As we walked, the villagers fell in behind us, clapping their hands and slapping us on our backs. 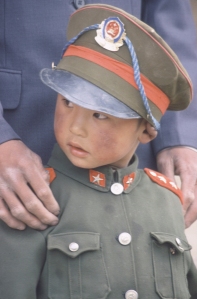 The villagers turned out in their favorite finery.

They escorted us to a large table that had been set up in a central courtyard.  With broad sweeps of their hands, they invited us to sit down.  Women came out of a nearby house carrying bowls filled with boiled eggs and boiled potatoes.  With a flourish, they set the bowls in the middle of the table and with obvious pride on their faces, indicated that we were to eat.  Shau Hu (our interpreter) had tears in his eyes.  He told us that they’d brought us the best that they had.

After we ate, they invited the medical team to go to the clinic.  Since I was the only member of the team that wasn’t a medical professional, I stayed behind.  Shau Hu, fortunately, stayed with me.

That’s when the imam sat down next to me.  He motioned to Shau Hu to translate and then without looking any further at our interpreter, began speaking directly to me, looking intensely into my eyes.  He said, “I understand that you are not a physician, but that you are a physician of the soul.”

“Well, yes,” I said, a bit humbled by the description, “I am a pastor.  I’ve worked with individual churches, but now I work with a fellowship of about 1400 churches coordinating service partnerships.”  I motioned toward him and asked, “Tell me who you are.”

I extended my hand and he took it.  It felt like I’d grabbed a stout piece of wood, his callouses were so thick from his own agricultural work.  We exchanged some more pleasantries and then he said, “How can you be a spiritual guide for 1400 churches?  I can barely keep up with our one mosque.”

I told him that we had many local pastors who took care of those churches, but that I still understood what he meant.  I’d felt totally inadequate to the task of spiritual care in the churches I’d served as senior pastor.  Then I told him of how I’d discovered the tradition of centering prayer and the regular practice of solitude in the mountains of Virginia.  I told him how the beauty of nature along the Little Piney River would always help still the noise in my soul. 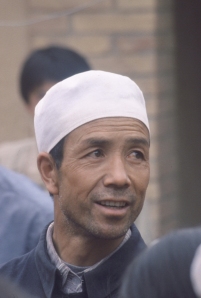 The village imam, my kindred spirit on the edge of Inner Mongolia.

As I spoke, his eyes began to glow and he nodded his head.  “Whenever I have a difficult case to guide people through,” he said, “I go walking in my favorite valley.  It’s not far from here and a stream runs through it.  Along the stream grow some trees and as I near the stream, it sounds as if God is applauding for me, and I find his wisdom in the quiet and solitude.”

Both of us sat astride the bench beside the table.  He reached out and clasped my knee and said, “We’re not that different, are we?”

When I hear fearful talk about “The Chinese,” I always think of that kindred spirit, quietly strolling along a stream on the edge of Inner Mongolia.  I agree with the man who said, “An enemy is someone whose story I haven’t yet learned.”

Drexel has been senior pastor of four churches in Kentucky and Virginia, a psychiatric ward chaplain, denominational bureaucrat, and an erstwhile indie singer/songwriter/story-teller and seeker of authentic human vocation. Currently, Drexel is working at the University of Alabama at Birmingham Medical Center in the capacity of The Support Team Network manager, a hospital-based community partnership aimed at nurturing healing communities for discharged patients. He loves kayaking, road cycling, hiking, and all kinds of photography, but he loves his wife Vicki and blended family of three adult children more. He holds a Ph.D. in the Psychology of Religion and a pastoral counseling certificate from the University of Louisville, Department of Psychiatry.
View all posts by Drexel Rayford →
This entry was posted in Insight, Listening, Spiritual Maturity, The Nature of Prayer and tagged inner Mongolia, Lanzhou, Mongolia, solitude. Bookmark the permalink.