What will this new year bring?  Prognosticators abound.  At the end of the year, we’ll probably see that most of them were clueless at the beginning of the year.  The fact is, none of us knows what this year will bring.  More than likely, the events that will most define us will be surprises, or in some cases feel more like ambushes.  For example, at the outset of 2013, I thought my biggest issue would be settling into retirement from pastoral ministry.  Lo, and behold, my marriage ended.

Now, I’d worked for a number of years to gain clarity concerning my leaving pastoral ministry.  Not surprisingly, I’d not spent any time gaining clarity about what I’d do were my marriage to end, so the issue that most defined me at the end of 2013 was something I was relatively clueless about at the beginning of 2013.  Something new had streaked unexpectedly through my life – sort of like a comet.

Do you remember Comet Hyakutake? A Japanese amateur astronomer spotted it in January, 1996 and the astronomical community got real excited about it. After some calculations, they determined that it would make one of the closest passages to earth of any comet previously known, including Hale-Boppe and the infamous Haley’s. 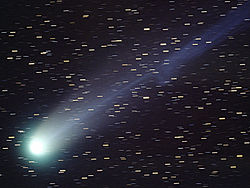 Comet Hyakutake on its closest approach to Earth on March 25, 1996.

I got excited about this new comet and went out on the evening of March 24, 1996 to take a look. It didn’t really look like much from where I sat. It resembled a smudge of faint light in the night sky just west of the handle of Ursa Major (The Big Dipper). Of course “where I sat” happened to be shrouded in ground light which diffused in the pollution and natural haze in the air to produce quite a bit of glare. Because of that glare, I couldn’t easily see Hyakutake.

Now, at first glance, the night sky seems so permanent, so unchanging. Sure, presidents come and go, empires rise and fall, the affairs of humanity seethe with change, but the stars remain fixed, unaltered, steady, and reliable. It seems so. Then along comes a comet. It streaks across the sky and reminds us that even in the vault of the vast cosmos, things exist that render clueless even the professional experts.

Separation and divorce streaked through my personal skies leaving me angry, insecure, afraid, feeling like a failure, lonely, grieved, and depressed.  All that constituted a thick mental-emotional haze. That psychological-spiritual “ground glare” obscured my vision.  A powerful funk ensued.

And then, Grace happened. Despite my cluelessness, I managed to do a few things right, with the help of loving, attentive friends. 1) I stayed connected to a community of wise and faithful people. 2) Despite an intense internal resistance to it, I sought out a therapist. 3) I remembered counsel I gave hundreds of people over a pastoral career and 4) actually put into practice (most of) what I’ve preached.  All of that has given me vistas unobscured by “ground glare.”

So, now that I can see a bit more clearly, this unanticipated thing that has streaked through my cosmos is taking on a different shape.  It looks less like a failure and more like an opportunity, less like something that has shut my life down and more like something that has opened my life up.  I’ve still got a way to go in all of this, but I take solace in the fact that comets have long orbits.  Calculations say that Hyakutake was last here 17,000 years ago – before human beings invented writing!  For us in our time, it’s a unique event.

Indeed, Creation continues in your individual life, as well, which means that things are likely to happen in the near future about which you’re currently clueless.  I imagine that if you manage the four things I managed above – 1) stay connected; 2) seek counsel; 3) remember your best wisdom; 4) put wisdom into practice – you’ll get past your own “ground glare.” You’ll begin to see awesome things you never anticipated.  You’ll feel less clueless. What new, unanticipated wonder is about to occur?  Don’t worry – you’ll be surprised!

Drexel has been senior pastor of four churches in Kentucky and Virginia, a psychiatric ward chaplain, denominational bureaucrat, and an erstwhile indie singer/songwriter/story-teller and seeker of authentic human vocation. Currently, Drexel is working at the University of Alabama at Birmingham Medical Center in the capacity of The Support Team Network manager, a hospital-based community partnership aimed at nurturing healing communities for discharged patients. He loves kayaking, road cycling, hiking, and all kinds of photography, but he loves his wife Vicki and blended family of three adult children more. He holds a Ph.D. in the Psychology of Religion and a pastoral counseling certificate from the University of Louisville, Department of Psychiatry.
View all posts by Drexel Rayford →
This entry was posted in Uncategorized. Bookmark the permalink.

1 Response to A New Year: Surprises, Ambushes, and “Ground Glare”