Moon Over Salzburg – On Spirituality and Coincidence 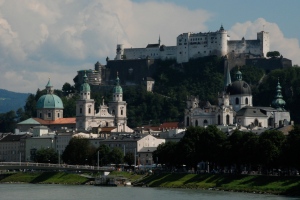 I took this image from the Müllner Steg in June, 2008.

The last time I was single, I lived for a couple of years in Salzburg, Austria. I love that city and I’ve made a number of return trips over the years since 1978, the last year of my more-or-less permanent residence there. I love that city not just because of the friendships that formed during my time there, but also because of the atmosphere of antiquity which seems to emanate from the very stones. Of course, like anyone who lives in an amazingly picturesque location, I constantly saw scenes I wanted to capture in photography. And like anyone who has visited this birthplace of Wolfgang Amadeus Mozart, I had an ongoing fascination with the cityscape of the old town.

My favorite perspective on Salzburg is from a bridge called the “Müllner Steg” that spans the Salzach River just north of the city. I took dozens of pictures from that vantage point while living there and each time I return for a visit, I make my way through the tight, winding medieval streets to the banks of the river to compose more photos of one of my favorite subjects.

One of my favorite photos I’ve ever taken – from the Müllner Steg in May, 1978,

Salzburg has more cloudy days and nights than clear, so when a particular evening in May, 1978 settled in with cloudless skies which coincided with a full moon, I knew I had to get to the Müllner Steg as quickly as I could. As I walked out on the bridge span with my camera and tripod, amazement seized me. A full moon sat suspended in a velvet sky reflecting off the calmly flowing waters of the Salzach.

This was a rare moment and I had an opportunity I knew would never come again in my life. I set up my gear and shot – and ended up capturing one of my all-time favorite photos.

Photographers will tell you that many of their great photos occur this way. You’re in the right place at the right time. Coincidence? Well, not exactly. You see, I’d lived in Salzburg for two years prior to May, 1978. I’d crossed the Müllner Steg many times and frequently I’d thought how wonderful it would be to catch the ancient churches and fortress on a clear, moon-bathed night. I’d also used my camera repeatedly and in the process learned how to take time exposures on a steady tripod by adjusting the aperture and shutter speed using either the camera’s internal timer to release the shutter or employing a cable release. Then, when the rare opportunity presented itself, I was ready. Nurture your photography skills and right when you need them, they’ll nurture you!

More often than not, the skies above Salzburg are more like this view from the same general spot. I took this shot in November, 1976.

I think there’s a spiritual lesson here.  As I’ve preached many times, spiritual maturity and insight don’t come quickly. There simply is no rapid path to wisdom. The capacity to understand deeper spiritual truths and discern the presence of God come after years of struggle. Then, after we’ve walked the same path repeatedly, imagining possibilities and nurturing our fond desires, an opening occurs where one had not been previously. Since we’ve been steady in pursuing this spiritual path over the long haul, we’re present to perceive beauty where before it would have eluded us.

This past March, I had one of the loneliest days I’ve experienced since I moved to Birmingham a year previously. I voiced a prayer at that point, a wordless inner intention – as the Apostle Paul said it – in groans that words could not express (Romans 8:26). Only a few minutes later, I received a text message from a friend in Richmond. He and a number of my Richmond friends were thinking about me, he said, and they wanted to know that they missed me. It was as if the full moon had risen over the ancient fortress of my heart, spilling a silver, silken beauty over the river of my soul.

Yes, I’d nurtured those relationships repeatedly while living in Virginia. Yes, they gather every Tuesday, the same day I used to meet with them and this happened to be a Tuesday. Yes, the odds were that at some point, they’d send a text telling me that they missed me.

But this timing was perfect – I hadn’t needed that text at any point like I needed it then. Mere coincidence? Nope. Nurture the community of faith and it will nurture you, right when you need it.  I think that’s how God works.

Drexel has been senior pastor of four churches in Kentucky and Virginia, a psychiatric ward chaplain, denominational bureaucrat, and an erstwhile indie singer/songwriter/story-teller and seeker of authentic human vocation. Currently, Drexel is working at the University of Alabama at Birmingham Medical Center in the capacity of The Support Team Network manager, a hospital-based community partnership aimed at nurturing healing communities for discharged patients. He loves kayaking, road cycling, hiking, and all kinds of photography, but he loves his wife Vicki and his daughter Melissa more. He got a Ph.D. in the Psychology of Religion mainly because he had a lot of self-examination to do.
View all posts by Drexel Rayford →
This entry was posted in God's Language, Insight, Loneliness, The Nature of Prayer and tagged God's Language, loneliness, prayer and coincidence, The nature of prayer. Bookmark the permalink.

6 Responses to Moon Over Salzburg – On Spirituality and Coincidence