The Giant in the Closet 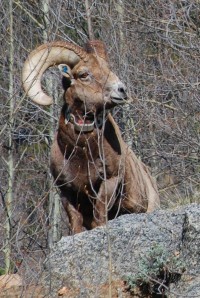 A large antlered animal on the trail in Colorado. (It’s a Big Horn Sheep)

Several years ago, I went backpacking in Colorado.  Our little expedition discovered big horn sheep grazing in the campsite the park service had designated for us.  The two Colorado backpackers keeping an eye out for us tender Easterners advised us that it would be most wise to allow the Big Horns to finish with our site on their own terms and on their own schedule, that our schedules took a back seat to theirs when in their home.  I was in no mood to try to motivate a wild animal with horns the size of artillery shells to quit munching what appeared to be pretty succulent grass, so I heeded their suggestion.  I dropped my pack, found a fallen log, and observed them through a strong telephoto lens.

Eventually, the Big Horn did move on to greener pastures and we set up camp.  Late that night, while the others lay sleeping, I imagined that I could hear the heavy fall of hooves around our site and I couldn’t go to sleep for fear of large, antlered animals trampling us.  So, I eased myself out of my tent to take a look.  The fire had died down to a few glowing red embers.  I could hear a soft wind sighing in the Ponderosa pines surrounding us and a liquid rattle rising from the nearby stream.  Indeed, the hooves I’d heard had been only in my imagination.

Hubble’s view of a spiral galaxy called rather unpoetically, “M51.”

Then I looked up at the sky – and gasped.  The sky was luminescent with stars.  Under my breath I did my best Carl Sagan imitation and said, “Billions and billions of stars . . .”  I realized all at once that I had never been far enough away from the glare of a collection of a billion urban streetlights to get an undiluted view of the sky.  The ground glare, refracted all around me at night in the humid, polluted skies of the industrialized east always made it impossible to see what was in fact always there right above me.  I pulled my sleeping bag out of the tent and lay down on top of it so that I could continue to gaze into the face of the cosmos.  I think of that night frequently where I live in Richmond when on “clear” nights I go out and can make out barely more than the brighter lights in Ursa Major (The Big Dipper).

That’s a good picture of what the life of the spirit is like.  Our lives rattle and clatter with all kinds of interference – soul-pollution, if you will.  The grate of the radio, stereo, television, ear buds, etc. fill our ears from dawn until we go to bed.  Music plays over speakers in every store and cell phones chirp, beep, whine, and sometimes play brief sonatas.  Meanwhile, surrounding us, “right there above us,” attempting to speak to us, is the voice of the One who formed the cosmos.  If we cannot “hear” the voice of the Creator, perhaps it’s because we too rarely get away from the spiritual glare that surrounds us.  I believe that’s one reason why Jesus said, “enter into your closet” when you pray.  He knew that for the most part, we humans are spiritual toddlers of our own making.  But he also knew that we have the potential to become spiritual giants.  Evidently, Jesus knew that you find the giants not at the edge of the beanstalk, but in the closet.

Drexel has been senior pastor of four churches in Kentucky and Virginia, a psychiatric ward chaplain, denominational bureaucrat, and an erstwhile indie singer/songwriter/story-teller and seeker of authentic human vocation. Currently, Drexel is working at the University of Alabama at Birmingham Medical Center in the capacity of The Support Team Network manager, a hospital-based community partnership aimed at nurturing healing communities for discharged patients. He loves kayaking, road cycling, hiking, and all kinds of photography, but he loves his wife Vicki and blended family of three adult children more. He holds a Ph.D. in the Psychology of Religion and a pastoral counseling certificate from the University of Louisville, Department of Psychiatry.
View all posts by Drexel Rayford →
This entry was posted in Listening, Spiritual Maturity, The Nature of Prayer and tagged Big Horn Sheep, Listening to God. Bookmark the permalink.

3 Responses to The Giant in the Closet